In solidarity with all the peace workers we work with in Korea, and all of humanity, we call on all Friends everywhere to consider endorsing the following:

Baltimore Yearly Meeting (“BYM”) of the Religious Society of Friends (“Quakers”) urges U.S. leaders to resist any temptation to a military strike against North Korea. The use of military force on the Korean peninsula would cause massive loss of life and other horrific consequences to Koreans and other nations’ people including our own. Over 100,000 Americans reside in South Korea, including thousands of civilians. Such a war, especially nuclear war, also would do terrible, long-term damage to the world’s ecosystem. As with the war in Iraq, an attack on North Korea would have unintended consequences.

Only continued patience, diplomacy and nonmilitary interactions hold the promise for true peace-building and a better future for the Korean peninsula. Our nation must reject the false promises of war and threats of war. The BYM region of Quakers include more than 52 worshipping communities in four states (Maryland, Virginia, Pennsylvania and West Virginia) and the District of Columbia with attendance of more than 7,000. Quakers have supported peaceful resolution of conflicts for more than 350 years, receiving the Nobel Peace Prize, participating in establishment of the United Nations and other practical, ongoing conflict resolution organizations. Consistent with Friends’ historic Peace Testimony, we “utterly deny all outward wars and strife and fightings with outward weapons, for any end or under any pretence whatsoever.”

Approved by Baltimore Yearly Meeting (Quakers) of the Religious Society of Friends, during Annual Sessions at Frederick, Maryland on 8/6/17

The Alternatives to Violence Project (AVP) - Korea group wrote the following open letter. Our hearts go out to them as we stand in solidarity with their sentiment. 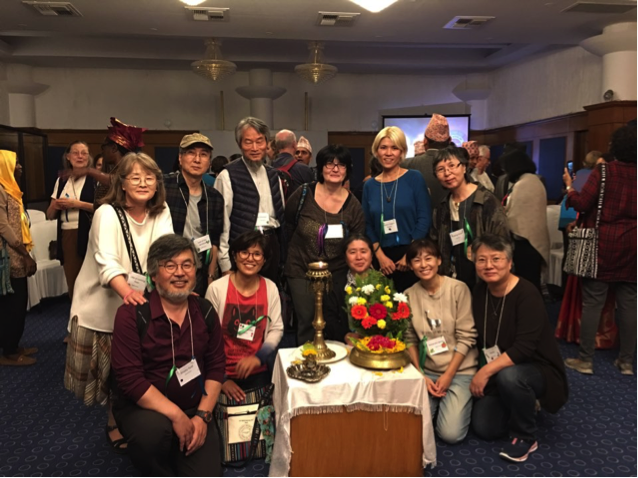 Dear friends around the world,

The Alternatives to Violence Project (AVP) in Korea sends our sincere hearts to our AVP friends around the world with joy and sadness. When we think about the present sad reality of Korea, we cannot help but express very deep concern. But it is a joy to have international friends to share in a difficult situation. As we all know, the verbal bombs and assaults between the United States and North Korea regarding North Korea's nuclear test, demonstrate that we live in danger of a terrible nuclear war. Their emotional fights put the 80 million citizens living on the Korean peninsula and many more people living around there at risk of the horrors of war. We, who refuse any violence, appeal to our friends around the world to assert and act together as follows:

We, who believe that no violence can create a peaceful world, urge U.S. President Trump and North Korean Chairperson Kim Jong-un to stop sending verbal bombs. The exchange of strong rhetoric with emotion has the potential to evolve into an armed confrontation. Therefore, we urge them to stop mocking each other and to communicate in a soft, peaceful and straightforward language about what they really want. We urge the United Nations, especially the U.S., to open space for mutual cooperation and end all types of international sanctions against North Korea because they will not solve the nuclear issue. North Korea has long learned how to survive such repression and sanctions from outside, and has pursued nuclear development under such circumstances, proving them ineffective.

We urge all nations to not to let powerful countries compete and intervene, but to let the people living in the area create our own peace. However, we also urge world governments to advice the North and South Korean governments to find a way to acknowledge both regimes and coexist.

We urge North and South Korea, United States and China to develop a dialogue for a peace treaty. The Korean War of the 1950s is not yet over. Since the 1953 Armistice Agreement, we are in a state of truce. On October 12, 2000, the United States and the North Korea agreed on 'Joint Communique' to liquidate hostilities and normalize diplomatic relations. North and South Korea, United States and China, who were all directly involved in the Korean War, must join in a peace treaty as soon as possible. Creating a peaceful atmosphere in Northeast Asia centered on the Korean peninsula will soon be the starting point for world peace. We insist on these points and hope that many of our friends will influence the leaders of the major nations in relation to the nuclear risk of the Korean Peninsula through their own channels. In particular, please advise President Trump and Chairperson Kim Jong-un to respect each other and build peace and coexistence. Please work with us through this AVP International Gathering in Nepal in solidarity, encourage us and help us get a message of excellent peace. We hope that at this opportunity, we will be able to find creative ways and wisdom that let life's transforming power work for conflicts between countries beyond our individual conflicts. As we strive for ourselves to be peaceful, we want the whole world to be at peace at the same time. We pray for the peaceful life of friends around the world.

Subscribe to NYYM Connect to get the latest news from NYYM, including Spark, InfoShare, email announcements, and more!